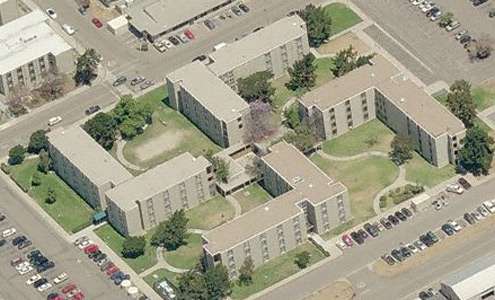 This collection of images includes some of the strangest locations revealed by Google Earth, from the deliberate (such as the brand placing) to the unexpected, like pet dolphins.

One of the first ‘stars’ of Google Earth, this painting was discovered on the roof of a farm building in Indiana.

This dolphin was picture in Siegfried and Roy’s Secret Garden at the Mirage hotel in Las Vegas. It makes me furious - if they think it is ok to keep a dolphin as a “pet,” then I wish the lion had eaten him (sorry for not being more impartial).

Who needs crop circles when a good old British farmer can deliver this innovative approach at a local airport?

A truly unique view of the Hollywood White letters - I think the shading is amazing.

A great example of when Google Earth throws up the unexpected. The satellite images revealed this 1960’s US Navy building on Coronado island, San Diego, in the shape of a swastika. At the time of construction, people were blissfully unaware that the World would one day see something only experienced by a few pilots at the time, but people did notice, and they are now being forced to spend $600,000 on new structures and extra greenery to change the shape.

The result of Typhoon Maemi in 2003, this is what happens to a cruise liner in high winds. In this case, a cruise liner turned into a hotel, but still impressive none the less.

His love of aviation is no secret, but the sheer scale of Travolta's airport is crazy, and one of the few private airports in the world.

It was only a matter of time before people caught onto this trend. Coca-Cola used 70,000 empty coke bottles for their logo on a hillside in Chile. To me just is just an extension of the advertising you see near airports, but it is still pretty impressive.

What better place to end than the Googleplex from above? I think we should demand they make it more interesting on Google Earth. The Microsoft HQ seen looks so much more interesting. Click here to view.

Just one of many topless sunbather photographs going around the web. Many more to be seen online.

Oil fields burning, south of Basra in Iraq. A really strong image that gives you an idea of scale.
6.1
Score
Popularity
Activity
Freshness
Get Better and Faster