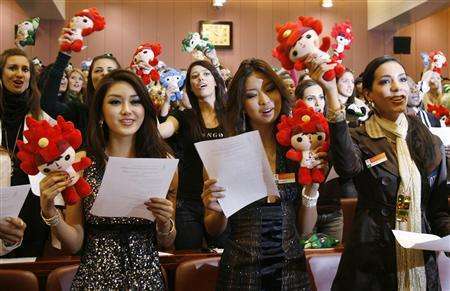 Bianca — November 21, 2007 — Special
References: uk.reuters
Share on Facebook Share on Twitter Share on LinkedIn Share on Pinterest
Next summer’s Olympic games just won’t stop stirring up controversy. Beijing is seeking out female representatives for next years games, but let the public know that unless you’re tall and thin, you needn’t bother applying. The female presenters will be in charge of giving out medals at the 2008 ceremonies.

“Hundreds of young women will be recruited as volunteers to present medals and raise flags at ceremonies for the Games, which open on August 8, but they must meet stringent criteria,” Reuters reported.

“‘We have some very clear conditions and demands,’ explained Zhao Dongming, director of the Cultural Activities Department at Beijing’s Organizing Committee for the Games.

“‘We have certain requirements for their height, since they are to present the medals to our athletes. They need to be of a height between 1.68 and 1.78 meters. That’s above average.’

And what about their figures?

“Generally speaking, they can’t be too fat. Their figure should be good. They shouldn’t be too heavy,” Zhao said.

So I guess there’s no ban on thin models in China? This could cause some controversy, as the Olympics are an international phenomenon. While other parts of the world have been actively protesting the dangers of scary skinny models as icons in the media, Asia has continued to be hungry for the stick-thin look.

Check out opposing views on skinny in the media:

99 Crowded Occurrences
Channeling the 'Rally to Restore Sanity' Attendance of 90,000+