Beach Cafe Made of Iron Sheets 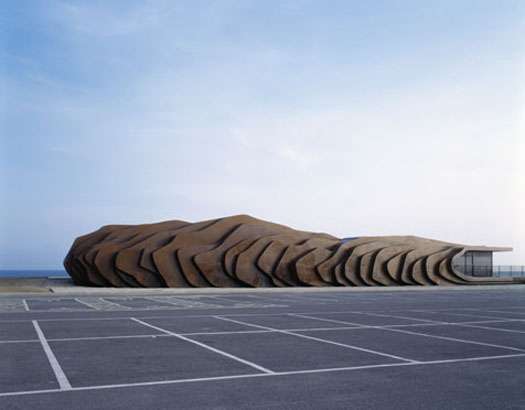 The owners of the East Beach Cafe wanted to discourage graffiti, which was a problem in the past, by getting rid of any large expanse of flat surface on the building. It was their intention to design a building that was long and thin, their thought being it would maximize the sweeping ocean views.

The architect took the "no flat surfaces" concept to the extreme by breaking the building into ribbons resembling the contours of a map. Each ribbon is 30 centimeters wide and was chosen for the peculiar reason that this was the size of a standard shutter which could cover the facade from the elements.

Really, it's as good of a reason as any.

I quite like the building for it's clear statement, "I turn my back on the land and look only towards the sea."

It's a very opaque building. It's sort of like a little child standing in the corner trying to ignore the world, but doing so in the most conspicuous way. From far off, the building is like a ferrous sand dune or a Mad Max dreamscape. I love it. Thanks for being forceful.
1.5
Score
Popularity
Activity
Freshness