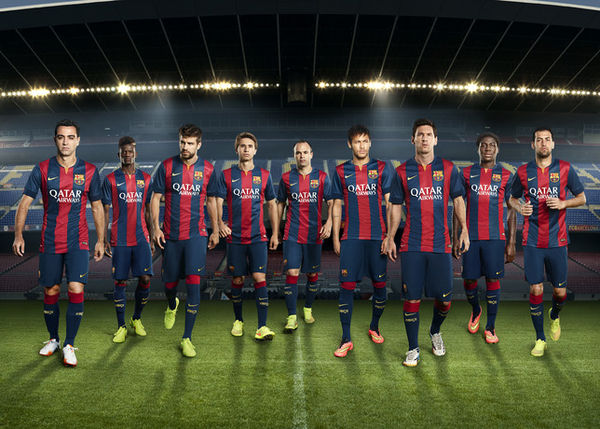 Rahul Kalvapalle — May 22, 2014 — Lifestyle
References: nikeinc & google
Share on Facebook Share on Twitter Share on LinkedIn Share on Pinterest
Sportswear giant Nike and Spanish soccer team FC Barcelona unveiled Barcelona's new home kit for the 2014-15 season. In recent years, Barcelona has become synonymous with attractive, passing football. This recently concluded season has been a disaster for the team however, as they were plagued with poor form on the field and raging controversies off it.

This gorgeous new kit lives up to Barcelona's nickname, the Blaugrana, meaning the blue and red. The kit features wider stripes however, and deeper, darker tones of both blue and red. The kit also boasts a relaxed blue collar infused with the yellow-and-red Catalan flag, representing the Catalan region of Spain from which Barcelona hails.

Players and fans of the team will hope that Barcelona's new kit will help improve the team's fortunes in the upcoming season.
2.4
Score
Popularity
Activity
Freshness
Access Advisory Services