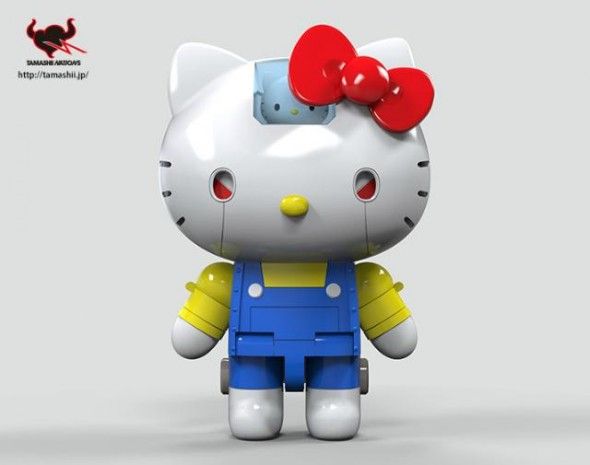 Malika Renee Butss — November 13, 2013 — Life-Stages
References: gizmodiva
Share on Facebook Share on Twitter Share on LinkedIn Share on Pinterest
Oh how time flies, as Hello Kitty turns 40 next month. To celebrate moving on over the hill, Hello Kitty teamed up with Bandai and put forth the Hello Kitty Bandai Robot. Japanese toy and video game-making company Bandai usually focuses on action figures and model kits that, more times than not, center around the characters in the video games they put out. For the big birthday celebration for the 40 year old kitty in charge, however, the company has had a change of direction.

The Hello Kitty Bandai Robot, though very cute and only 4 inches tall, is not a force to be reckoned with. This robot kitty comes with a variety of funky fighting features, such as underwater mode, flying mode, running mode and its special "rocket punch" where the fierce feline fires a rocket from its arm. Talk about tough kitties.

For added detail and creativity, located on the head of toy is a "cockpit" for a 9-inch kitty operating the machine. This Hello Kitty toy is sure to dominate the rest and if it doesn't, it could always just fire a "rocket punch" and alienate the competition.