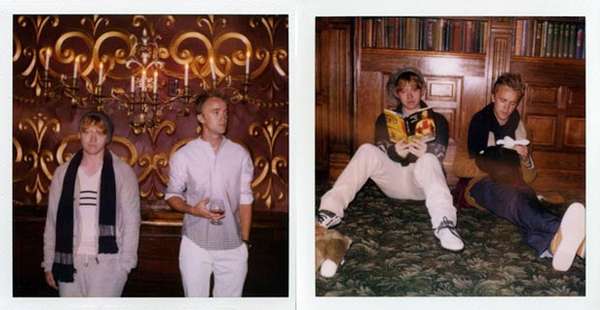 Meghan Young — September 4, 2011 — Fashion
References: bandofoutsiders & lifelounge.au
Share on Facebook Share on Twitter Share on LinkedIn Share on Pinterest
Just because the 'Harry Potter' film franchise has finally been laid to rest, to the despair of fans all around the world, doesn't mean that we won't be seeing those familiar faces again; case in point, the Band of Outsiders AW11 lookbook. It stars none other than Rupert Grint (Ron Weasley) and Tom Felton (Draco Malfoy). Aside from these two superstar models, the catalog takes on the fashion label's signature Polariod layout once again, as though in an attempt to make it seem like it's not that big a deal.

Following in the footsteps of James Marsden and Kirsten Dunst, Rupert Grint and Tom Felton embrace their laid-back, boyish nature as they lounge about an old hotel or mansion drinking, playing cards and making mischief. Since the Band of Outsiders AW11 collection itself is quite relaxed, it seems like the natural thing to do.
1.7
Score
Popularity
Activity
Freshness
Get Trend Hunter Dashboard