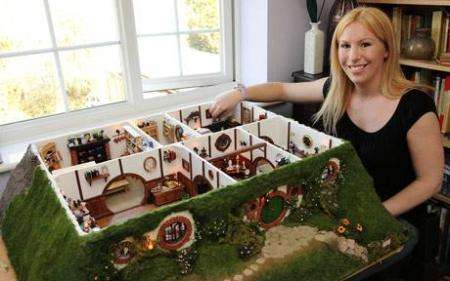 Meghan Young — November 8, 2012 — Unique
References: madshobbithole.wordpress & neatorama
Share on Facebook Share on Twitter Share on LinkedIn Share on Pinterest
Bag End by Maddie Brindley is a dollhouse that shames all other dollhouses. Not only is it modeled after the home of Bilbo Baggins, the protagonist and titular character of 'The Hobbit' and kinsman of Frodo Baggins, it is mind-bogglingly detailed to the point that a person would believe that a miniature hobbit was actually living in it.

Inspired by her love of the novel 'The Hobbit,' and revealed just in time to coincide with the release of its film adaptation, Bag End by Maddie Brindley was initially created for a college course. But as far as slippery slopes go, what at first was supposed to be a simple facade of the hobbit home became a full-blown dollhouse complete with furniture, scrolls and, of course, a dining table set with food.
4.4
Score
Popularity
Activity
Freshness
Get Trend Hunter Dashboard