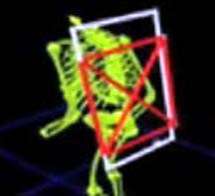 "While it might be useful for Santa, the backpack was created with soldiers and emergency workers in mind and could prevent the sort of muscle and joint injuries associated with running while carrying heavy items. The Penn researchers also point out that the backpack will also benefit schoolchildren, since heavy book bags have been linked to muscle and orthopedic injury.

"For the same energetic cost, you can either carry 48 pounds in a normal backpack or 60 pounds in a suspended-load ergonomic backpack," Larry Rome, a professor in Penn's Department of Biology, said. "It is like carrying an extra 12 pounds for 'free.'"
The backpack is based on a rigid frame pack, much like the type familiar to hikers everywhere; however, rather than being rigidly attached to the frame, the sack carrying the load is suspended from the frame by bungee cords. The ergonomic backpack reduces the force of the load on the wearer by reducing the effect of the load as it shifts up and down," Rome said. "What is striking is that you can feel the 86% reduction in force with every step."