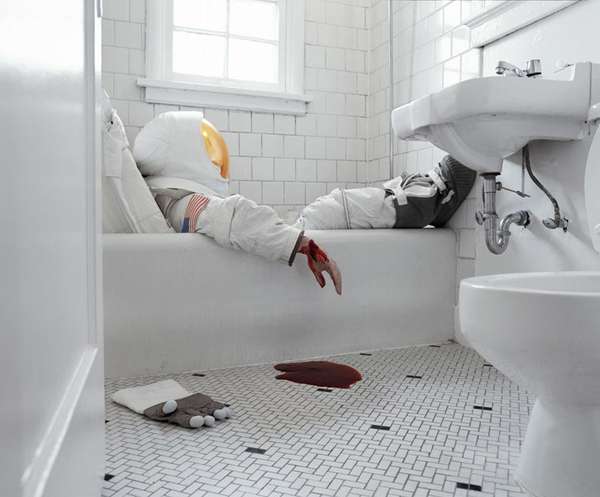 Deborah Kim — August 4, 2011 — Fashion
References: astronautsuicides
Share on Facebook Share on Twitter Share on LinkedIn Share on Pinterest
The Astronaut Suicides is a collection of photos shot by photographer Neil Dacosta that follows a self-hating spaceman. The astronaut is depicted harming himself in various ways, which include pills, self-mutilation, gas and jumping off of a tall building. All of these images are quite disturbing, but it helps that viewers can't see the face of the man in the suit, making a divide between audience and astronaut.

Astronaut Suicides was styled by Sarah Phillips and retouched by Saskia Thomson, and the collective inspiration behind this collection is a quote by Barack Obama. The quote reads, "I understand that some believe that we should return to the surface of the moon, but I have to say this bluntly, we have been there before." The message behind those words encourages people not to dwell on the past. However, what happens when these moments are the greatest accomplishment in a person's life? This dark and depressing photo collection is a vivid look into suicide.
5.1
Score
Popularity
Activity
Freshness
Attend Future Festival Virtual