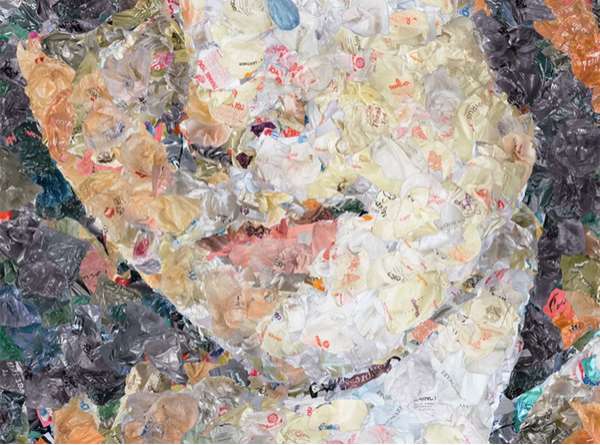 As an artist, Chris Jordan says he "Hope[s] to raise some questions about the roles and responsibilities we each play as individuals in a collective that is increasingly enormous, incomprehensible, and overwhelming." His work has attracted an incredible amount of press for its ingenuity and noble aim. Chris Jordan's work has been exhibited across the world, including Washington, D.C., New York City, Taipei, Taiwan, and Rome, Italy, the latter two as a part of the National Geographic Eco Tour.

In the next year as a solo artist, Chris Jordan has exhibits set for Richmond, Virginia, Durnam, New Hampshire, and Wilkes Barre, Pennsylvania, amongst others. He also has a group showing at the Henry Art Gallery in Seattle, Washington, running from July 9th-September 25th, 2011.

Implications - in the last few years, there has been a concerted societal effort to focus on ways they can increase the resonance of environmentally friendly advertising. One of the most effective ways a company can do this is by commissioning an artist to create installations that detail the real environmental damage and human suffering caused by pollution and waste. By illustrating the damage caused by eco-unfriendly living, the company can force the public to examine the role -- no matter how small -- they cause in pollution and environmental destruction.
5.9
Score
Popularity
Activity
Freshness