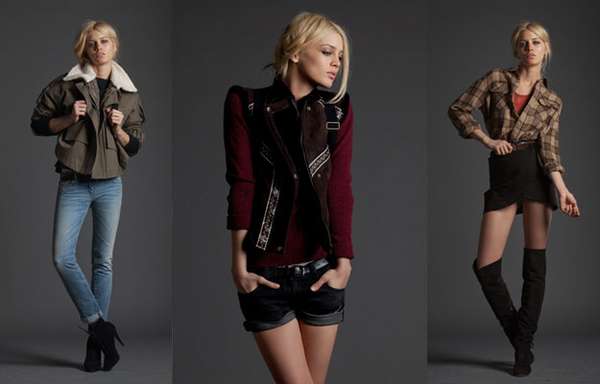 The April, May Fall 2011 Lookbook is as Rustic as it is Refined

Meghan Young — September 3, 2011 — Fashion
References: aprilmay.fr & refinery29
Share on Facebook Share on Twitter Share on LinkedIn Share on Pinterest
Who would have ever thought that French fashion would ever be described as rugged or rustic, let alone look the part; the April, May Fall 2011 lookbook showcases outfits that are just that. Of course, there is still the quintessential chic and sophisticated aesthetic about each look, even those that are more rugged than the next.

Headed by designer Diane Goldstein, the April, May Fall 2011 collection features a touch of both worlds, mixing them together to create looks that casual yet polished, rough yet refined. From checkered button-down tops and chunky knitted sweaters to sexy LBDs and second-skin silks, there is a luxuriousness to the line and lookbook that is nevertheless made for the working woman who cannot always be in high heels but wants to portray that put-together vibe.
6.3
Score
Popularity
Activity
Freshness
Get the 2021 Trend Report FREE