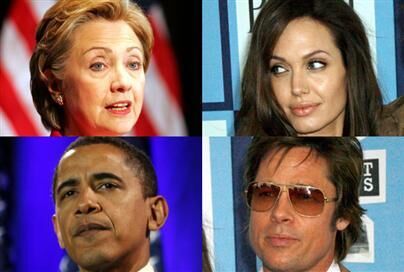 Bianca — July 4, 2008 — Pop Culture
References: blogs.dw-world.de
Share on Facebook Share on Twitter Share on LinkedIn Share on Pinterest
Angelina Jolie's indecision as to whether she will vote for Obama or McCain has made headlines, and it brings up an interesting topic. Is our society so wrapped up in celebrity culture that people will let the personal political choices of stars influence their own voting practices? Judging by recent media reports, it certainly looks that way.

"Everyone thinks that I have made up my mind," Jolie told the Frankfurter Rundschau. "But my decision is still very much open. I have listened very carefully for what Obama and McCain stand for, which is something that every voter should do. I will make my decision only after I know what both candidates plan to do in the areas that are important to me."