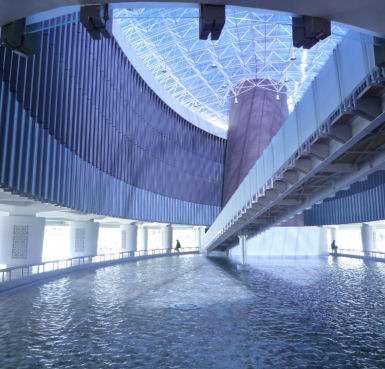 Tsunami Museum is Covered in Water Walls, Filled With History

Nika Kubiak — April 10, 2009 — Art & Design
References: leisureopportunities
Share on Facebook Share on Twitter Share on LinkedIn Share on Pinterest
The controversial Tsunami Museum in Aceh, Indonesia, designed by local architect Ridwan Kamil, is breath taking. It's a glass ocean of architectural delight, built in the shape of a futuristic ship, with long curving walls covered in geometric Islamic reliefs. It looks like a strong tidal wave from outside, and on the inside, serene water walls give the building a fusion of straight beauty and danger.

It serves as a tribute to the people killed by one of the most devastating natural disasters, whose names are to be inscribed on one of the walls in the museum.

The question remains: with the homeless families who wear victims of the tsunami, is it in good taste to invest millions of dollars on a monument to honor them? The architect has to ensure that the building acknowledges both the victims, but is it enough?

The new museum is a symbol of refuge. The designer even incorporated an “Escape Hill” for visitors to run to in the event of another tsunami and a “Thousand Hands” dance, a symbolic gesture dedicated to the strength and religious beliefs of the local people. The main inspiration for this master piece was the traditional structure of the houses in Aceh, designed to survive flooding.

Exhibitions at the museum include an electronic simulation of the Indian Ocean earthquake that triggered the 30-foot high waves, in addition to photographs of victims and exhibits featuring stories from survivors of the disaster.
5.2
Score
Popularity
Activity
Freshness
Attend Future Festival