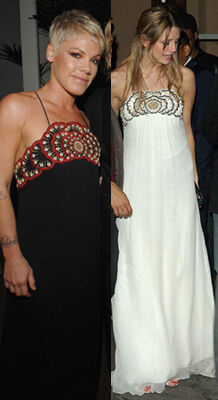 Every big event like The Oscars, Grammys, MTV Awards, etc, we have to see the same dress at least once: two big screen stars or rock stars attend the awards event and get their pictures with the same dress.

In this case, the rock star Pink and Mischa Barton wore the same dress, but in different color by the British designer Alice Temperley. Both dresses were part of the Temperley London collection. Do you think Alice temperley will be chosen by other stars to be dressed for a special event?
4.9
Score
Popularity
Activity
Freshness
Jeremy Gutsche Keynote Speaker