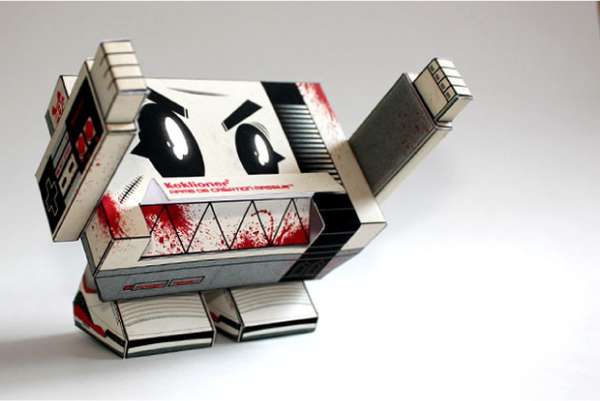 Jason Soy — January 30, 2012 — Tech
References: art.kekli.fr & m7781.tumblr
Share on Facebook Share on Twitter Share on LinkedIn Share on Pinterest
The Nintendo Entertainment System just got a rad makeover with the Alexis Huret papercraft sculpture. Titled the K.A.C.M. Monster, this impeccable piece of art doesn’t only replicate the old NES system down to a tee, it’s also personified to look like a badass cartoon character. Check out its ludicrous fangs, blood-stained body, NES controller arms and, perhaps the sweetest addition of all, wicked Nike-like sneakers. Even if you aren’t a fan of retro gaming, you have to admit, this paper toy’s ridiculously cool.

Alexis Huret has many custom toy creations equally as stellar as this outrageous Nintendo homage. And the greatest part of all, she gives visitors of her site downloadable blueprints to recreate the thing for themselves. Just grab a pair of scissors, some glue and make yourself a new desk buddy.
2.7
Score
Popularity
Activity
Freshness
View Innovation Webinars