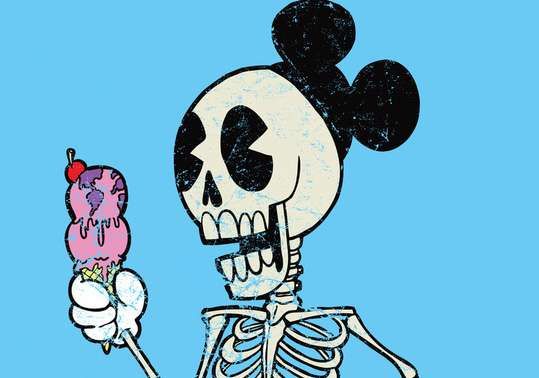 Jason Soy — February 23, 2012 — Pop Culture
References: society6 & lacarpa.tumblr
Share on Facebook Share on Twitter Share on LinkedIn Share on Pinterest
Illustrators seem to love taking Disney characters out of their childish context and making it more adult-friendly, and Alejandro Giraldo is one of those illustrators. Stripping characters like Donald Duck and Mickey Mouse of their flesh, Giraldo depicts skeletal versions of the beloved cartoon personalities. Giraldo titles the pictures ‘Mickey Bones’ and ‘Donald Death’ respectively, and they look as though they should be tattooed onto someone's arm rather than appear on the Disney channel.

Looking through Alejandro Giraldo’s eclectic portfolio, the up-and-coming graphic designer has a fascination with making cutesy cartoons geared towards hipster 20-something-year-old crowds. From a trippy group of personified animals having a tea party to portraits of Bill Murray, Giraldo’s images are the definition of cool, which is probably why companies like Nike, Snickers and Threadless have already commissioned him for illustrations.
4.7
Score
Popularity
Activity
Freshness
Jeremy Gutsche Keynote Speaker