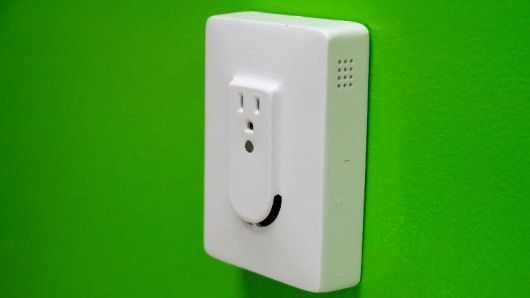 The AirGuard Rats On Cigarette and Marijuana Smokers.

Rahul Kalvapalle — October 30, 2014 — Tech
References: freshairsensor & gizmag
Share on Facebook Share on Twitter Share on LinkedIn Share on Pinterest
AirGuard is a special smoke detector that can detect tobacco and marijuana smoke and send a WiFi alert to concerned authorities. The device is designed for use in workplaces, hotels, transit stations, public housing, dorms, prisons and anywhere else where people aren't supposed to smoke but often do so anyway.

The AirGuard comes in two versions. The first is a battery-powered unit that communicates with Android phones via Bluetooth. The second is a plug-in device. Both devices use polymer films to sense cigarette and marijuana smoke, before ratting them out by sending a WiFi alert to a central system, which can then send an email straight to an administrator.

All I can say is I'm glad this thing wasn't around when I lived in university dorms.
2.3
Score
Popularity
Activity
Freshness
Get Trend Hunter Dashboard