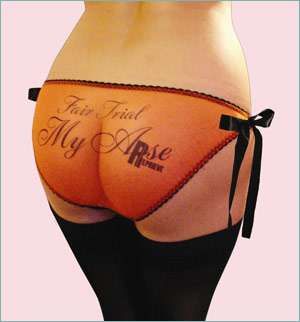 mediterranean — March 24, 2008 — Fashion
References: agentprovocateur & style
Share on Facebook Share on Twitter Share on LinkedIn Share on Pinterest
Never one to shy away from controversy, Agent Provocateur's co-founder Joe Corre thought of a creative protest message when he discovered that members of the U.K. human rights charity Reprieve had been accused of smuggling underwear to a prisoner held at GuantÃ¡namo Bay. And out came the "Fair Trial My Arse" panties which he conceived with Reprieve founder Clive Stafford Smith Corre.

The bright, GuantÃ¡namo-orange panties with a "Fair Trial My Arse" on them (The R in arse spells Reprieve as well) are on sale at Agent Provocateur stores in the United States and United Kingdom with half the proceeds going to support Reprieve.

Corre said, "I don't really mind who buys them, or if we sell any at all. As a company we've often taken an interest in the political theater. Whoever said you can't mix business with politics is obviously an idiot, as the two are inextricably linked."
6.4
Score
Popularity
Activity
Freshness
Attend Future Festival