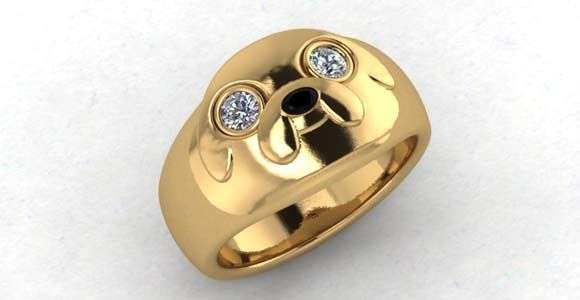 The Adventure Time Engagement Ring Takes the Form of Jake

Meghan Young — August 23, 2013 — Lifestyle
References: themarysue & neatorama
Share on Facebook Share on Twitter Share on LinkedIn Share on Pinterest
The Adventure Time Engagement Ring could very well blow any other geekily sentimental creation ever made out of the water. Inspired by the American animated television series of the same name, it takes on the form of Jake, a dog with magical powers to change shape and grow and shrink at will. As Neatorama points out, "Jake could totally transform into an engagement ring."

Commissioned by comic creator Josh Adams, who is known for his ongoing work on Doctor Who as well as the Batman Odyssey series, the Adventure Time Engagement Ring was inspired after seeing Paul Bierker’s R2-D2 ring. Adams reveals, “Currently I have Paul working on my wedding band which will make the Jake ring part of a pair as my ring will be Jake’s butt. Seriously.”
6.7
Score
Popularity
Activity
Freshness
View Innovation Webinars