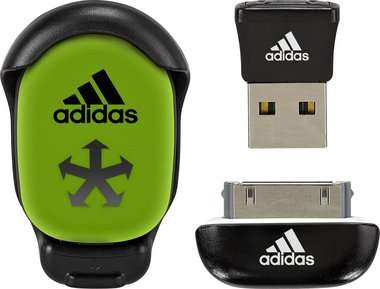 Stephanie Williams — October 26, 2011 — Lifestyle
References: techcrunch & oregonlive
Share on Facebook Share on Twitter Share on LinkedIn Share on Pinterest
The Adidas miCoach SPEED_CELL is a new high-tech gadget specifically made for the company's sneakers. The device, will be used and placed in the sole of an individual’s shoe to capture information based on their motion from every different direction.

Although this device may possibly be extended to other Adidas sports shoe brands, the miCoach SPEED_CELL will specifically be used for their soccer shoe, the Adizero F50. Special features of the miCoach SPEED_CELL include its ability to measure speed, distance and time during both practices and competitions. The device is also a great performance reporter because it will allow amateur and professional athletes alike and other individuals to understand and track their overall game and/or performance based on metric results. The miCoach SPEED_CELL's memory then stores up to seven hours of an individual’s performance data, which can then be uploaded and wirelessly transmitted to their Smartphone devices, tablets, PC or MAC computers.

The miCoach SPEED_CELL is about the size of a mini USB-key, and is a great technological performance recorder that analyzes one’s overall athleticism, and helps individuals learn how to improve their abilities based on their previous metric results.