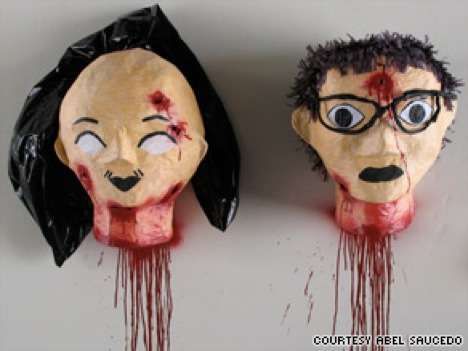 Abel Saucedo’s piñatas are decapitated bloody heads—not unicorns, hearts or cartoon characters we’re used to seeing. They’re meant to comment on the ongoing violence at the U.S.-Mexico border over drugs. The series is titled “Ciudad Juarez es the .1,” and currently appears at El Paso’s Public Library in Texas.

As you might imagine, Abel Saucedo hasn’t exactly received an overwhelmingly positive reception to his piñatas. But, as he tells CNN, he’s proud of his sculptures nevertheless:

“I have had all kinds of responses. People like them, they think it’s a great idea. People think its offensive, sad, it’s humorous, but people say it’s the truth. In art I’ve learned that everything everyone says, it’s an opinion,” said Saucedo.

“As a person living here in the community, as an artist, this is my opportunity to speak, and it’s tragic. My family and friends have had to move, it’s tragic. I feel it’s my responsibility as an artist to represent those feelings,” said Saucedo.