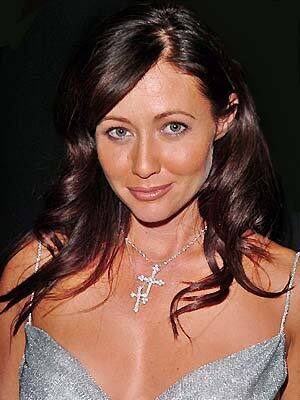 Bianca — July 4, 2008 — Pop Culture
References: television.gearlive
Share on Facebook Share on Twitter Share on LinkedIn Share on Pinterest
Shannen Doherty, one of the original 90210 cast members, will be returning to the show when it is relaunched later this year. The directors of the new TV show asked Doherty to come back on, but the actress has yet to commit. She wants to have a look at the plot first and examine the pay cheque offer before agreeing to reprise her role.

Her former rival, Jennie Garth, says she could deal with Doherty coming back on set.

â€œA lot of time has passed, and I'm a big girl,â€ Garth said. â€œI'd have no problem with her coming on the show.â€

Torrie Spelling, on the other hand, doesn't want to revive her character for â€œpersonal reasons.â€

One of the most frustrating parts of retro TV show revivals is not having the same actors play the parts, but when the spin-off airs a decade later, the characters are much older and the actors that play them have usually fallen out of touch with the roles they once played.

Meanwhile, Friends is also being revived, but in the form of a movie.