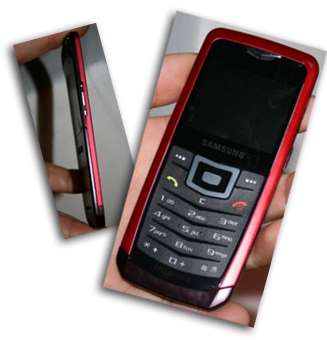 londonscout — January 24, 2007 — Tech
References: samsung & crave.cnet
Share on Facebook Share on Twitter Share on LinkedIn Share on Pinterest
Now Samsung has made a phone that's just 5.9mm thin -- that's a whole millimetre thinner than the iPod nano and sets new standards for ultrathin phones. The features are impressive for such a small phone. It has a 3.2-megapixel camera, music and video player, Bluetooth connectivity and 80MB of internal memory. From the pictures it looks like it has the traditional layout and that the keypad is completely flat.

As seen on CNet, Samsung have unveiled their thinnes phone yet.... CNet write"Last year, while in South Korea visiting Samsung's HQ, we asked its design team whether it was possible to make a phone thinner than the X820, which is 6.9mm in depth. They didn't give too much away but they said it definitely was possible. At that time there was a video circulating around the Web that featured a Samsung X820 being snapped in half as easily as a digestive biscuit. We thought this might spell the end for thin phones, but Samsung claimed the handset wasn't that weak and that the phone in the video had been tampered with. Indeed, we did our own tests and found the X820 sturdy enough to withstand normal use. "