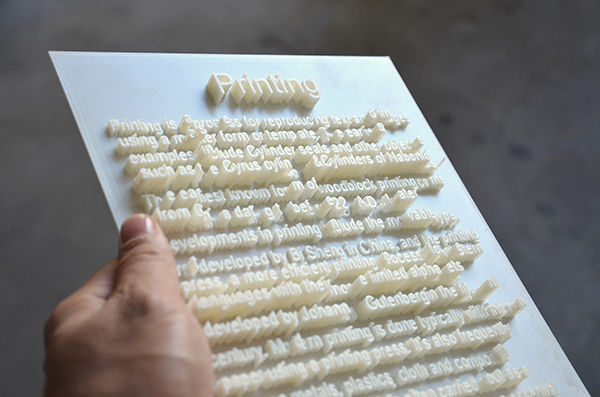 Textscapes Experiments in Rendering Fonts Fully Formed in Another Dimension

Amelia Roblin — January 21, 2015 — Art & Design
References: hongtaozhou & fubiz.net
Based on what people have experienced since the dawn of written language, lettering is aesthetically considered to be a two-dimensional medium. Now, here comes 3D-printed typography by Hongtao Zhou that literally extrudes character markings into another scope of space.

Using a 3D printer, this designer has translated a flat typed document into one with obvious texture. Each letter forming each word is extended away from its new-tech slate, keeping the familiar alphabetic shapes discernible when viewed straight-on. The cool look of it aside, Textscapes 3D-printed typography embodies particular beauty because of the implications for a wider base of readers. Those with visual impairments will be able to appreciate the tactility of these engaging raised fonts.
6.2
Score
Popularity
Activity
Freshness