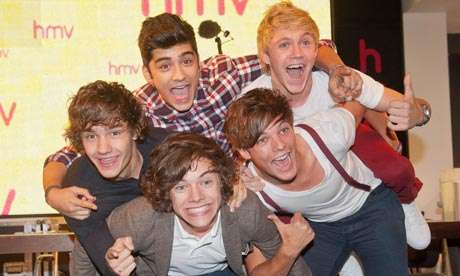 Krystal — August 14, 2012 — Pop Culture
References: postcity & thestar
Share on Facebook Share on Twitter Share on LinkedIn Share on Pinterest
After the band performed two sold out shows in Toronto this summer, it became clear to Reece Page, the 1D World store Manager, that Toronto was home to many loyal One Direction fans. The boys' presence in Toronto created madness in the downtown area as fans raided the streets just to see if they could get a glimpse of the crooners.

The dedication among Toronto fans was the deciding factor to open up the very first 1D World in North America, right in Toronto. This temporary merch store has been previously located in Sydney and Perth, Australia, obtaining tremendous amounts of success, as tons of fans lined up early anticipating the grand opening.

Located at 680 Yonge St, 1D World will open up on Saturday August 18, 2012 at 9 AM and will run until September 2, 2012. 1D World will sell exclusive One Direction merchandise that Directioners won’t be able to find anywhere else. Fans who arrive on the opening day will also get an exclusive chance to win tickets to one of their sold out shows at the Air Canada Center next summer.

If One Direction lights up your world, don’t miss this once-in-a-lifetime opportunity to find that one thing you are looking for to complete your 1D collection!