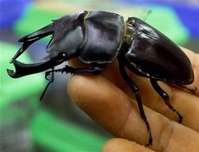 Alex Covert — October 5, 2007 — Unique
References: news.yahoo
Share on Facebook Share on Twitter Share on LinkedIn Share on Pinterest
The new trend in travel appears to be organic luggage. Customs officers in Amsterdam stumbled upon what appeared to be your typical insect collection, but upon closer inspection (really close), the officials found yet another one of Mother Nature's products - cocaine. All told, they found about 300 grams inside the hard exoskeletons of about 100 dead beetles. "Let's put it in these giant dead bugs, man! They won't get anyone's attention."

Implications - The days when drug mules hid their payload in false pockets and secret luggage compartments are all but over. These days, smugglers have become incredibly resourceful as a reaction to the expanding authority of security contractors, who are deployed in most international airports. Despite raising the public's ire, 3D scanning technology and invasive searches performed by private contractors are big money and dozens of prospecting companies have already jumped at the lucrative opportunity.
4.2
Score
Popularity
Activity
Freshness
Access Advisory Services