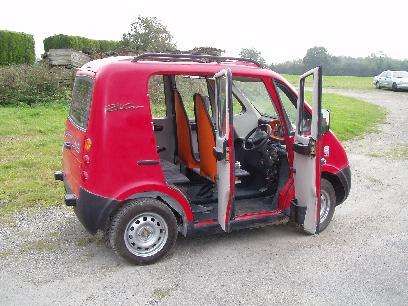 The battery-powered Zecar is only three metres in length and stands 1.8 metres, or about 5ft 9in, but it packs a smokin' good deal for its minuscule size. The Zecar reaches a top speed of 56 mph reaching 0-40mph in 15 seconds. The running cost is between 1-2p per mile, the range is 56 miles, and best of all, there are NO on-road CO2 emissions.

The Zecar isn't the cheapest or the chicest, but "The icing on the cake is that, for the time being at least, Zecars and Zevans will be more exclusive than Ferraris," the Telegraph reports.

The all-electric cars and vans are environmentally friendly alternatives that, despite looking odd to many people now, may just become the norm for cars on the streets a few years down the road.

For those who prefer something more chic, Stevens Vehicles are planning to launch the Cipher range which will include a stylish leisure car and a cabriolet for those preferring the open convertible top design.

Hey, we can't all afford the Tesla!