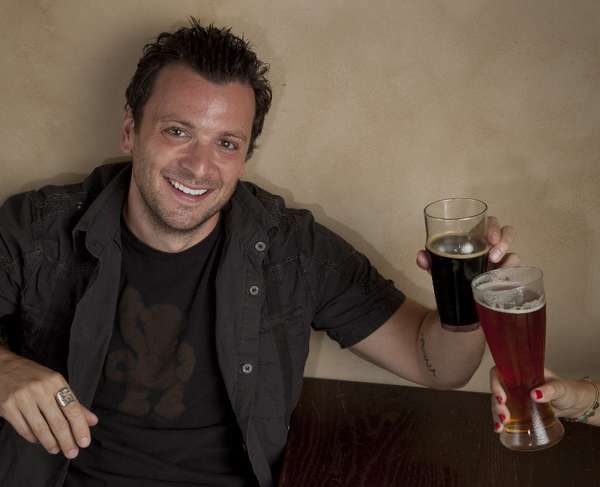 It’s informative standup, and it’s sure to be good times considering Zane Lamprey’s proven ability to be a welcoming and hilarious host. So what makes this hot host tick?

1. How did you get involved in comedy? Was there a moment when you realized you were a comedian?

I don’t know. My whole life I always knew that that was the right thing. I didn’t know it would be focusing on alcohol, but…you know, but I knew it would have something to do with my comedy. It’s just the way I’m wired I guess. I think my mom has several stories starting from when I was about three or four, so I guess that’s when we knew. When I tell a joke to get myself out of trouble, and I’m successful doing it…that was the beginning.

2. What motivates you to continue in such a tough industry?

3. Tell me about your “Drinking Made Easy” tour.

In my travels, I’ve come to appreciate alcohol for its traits as opposed to its effects. (You know, making me drunk.) It’s stand up, so it’ll be me talking for about an hour on beer, wine, liquor, fermentation, and distillation.

4. How did you come up with the idea of doing a live tour?

I’ll sit here and talk to people about the different alcohols or beers, or why certain beers are more popular, and I realized that even though I started out as a comedian I’ve become an accidental expert. I actually have some information to share, and I’ve always wanted to do a standup tour, so why not a tour talking about booze? I’ve never done a standup tour, and I’ve done little standup. I do a lot of events, and I do a lot of public speaking, but I don’t necessarily go up there with planned material. This’ll be the first time I’ve done something like that.

5. Will there be audience participation (i.e. drinking) in the show?

You know, we were thinking about that, and considering it. Do people really understand the difference between all the different bourbons and scotches that are out there? Are people making decisions based on what they like, or based on their perception of a brand? Every time I’ve had someone over to my house, they are always surprised that they actually like something other than what they thought they liked. So I was going to have that be a part of the show, but I feel like even though it’s a learning experience, I don’t know how entertaining it is. And it’s really important that “Drinking Made Easy” be entertaining, above and beyond. I’m not really going to have much audience participation—I am going to open it up to questions at the end. I think that’s about it, for now.

6. Do you think that cool hunting and trend spotting are important in comedy?

You know, it may actually be the antithesis of that. Because if I was really trying to be cool…the most obvious thing is when someone is trying to be cool. My approach is that I don’t try to be cool. I try to get back to my dorky self, because we’re all innately dorks. If I go in showing that I’m a dork, and my comedy is self-deprecating, and I’m making fun of myself…that’s probably the most relatable thing to anyone out there. I don’t think anyone is as cool as they wish that they were. We all wish we weren’t as clumsy, or we’ve left a room realizing we said something dumb. So when I do that, I think that’s more relatable.

7. What is the key to staying fresh and innovative?

All I do, week to week, is try to keep myself relevant. So, if my show is on the air, with a new episode every week like it is now, great. I’m covered for that week. If it’s reruns or if it’s off the air, which it has been in the past year or so, then I have to figure out what I can do to stay relevant. So I do a lot of work on my Web site, on social media, on Twitter and Facebook. I have events like this standup tour. I’ve written a book. Whatever I can do to keep myself a lively topic of current affairs.

8. Three Sheets has had enormous success on Hulu, which is far from traditional television success. What are the most important trends you see in the television and entertainment industry?

You know, several years ago, I think it was expected that people would be watching TV online even more than we are now. I think we’re just using it to supplement right now. Being able to TiVo and DVR your shows might have made more of an impact on television than even the Internet has. I don’t think people are giving that enough credit. Even our ability to fast forward through ads and stuff. At least Hulu can keep you prisoner for those 30 seconds.

It’s trends like that, and wondering where advertisers are going to go. With all the money they’re spending they’re going to have to come up with some creative new ideas now that they know that commercials are out the window. So we’ll see a lot more product placement and cooperative efforts through advertisers for whole shows.

And on television, it’s sort of like where have the sitcoms gone? It’s all reality programming. You used to have an hour of TV, and you’d have two sitcoms, and besides all the production staff, you’d be employing as many as 30 or 40 actors. But now, in that same hour, whether it’s Jay Leno or a reality show like Survivor, you have no actors, just the host. So what used to be so many jobs for actors have been dwindling down. There’s been a shake up for us, as well. I started doing hosting a while ago and I think it’s what a lot of people are gravitating towards, because now the only actor is the host that’s running the show.

9. What are your ambitions for the tour?

We’re doing what’s basically a preview in California. We’re doing six days in California, one in Reno, and one more in San Francisco for New Year’s Eve. We’re basically trying to show the clubs, the promoters, everybody, that this is a show people are going to come and see. We were actually able to keep track of our ticket count, and we’ve done really well. Once we prove that this tour is something that people will come and see, then we can go national.

10. What is an example of a time where you have thrown away an existing idea to force yourself to find something new?

It was around 1999 or 2000 that I started doing this hidden camera show. I made like two or three episodes on my own, and I got better and better at them. But I realized that, as an unknown like me, to come out and do something like that… Even someone like Jamie Kennedy, who was doing it at the time, had some cache. People knew who he was and he had some credits to his name. And of course there were the guys on Jackass, who were just trying to be @ssholes.

I had to then say, okay, I’m throwing this out because this isn’t working. That’s recent advice that I’ve given to people. At some point, when something doesn’t work, you stop doing it. I made three shows, and realized it wasn’t what was going to put me on the map. Then I went on a show that Merv Griffin was doing, and started doing some man on the street stuff, and realized that that was my forte. I started putting my effort into that, and then that turned into Three Sheets, so it worked out.

11. How do you reset yourself to be creative? Do you have any rituals?

Drugs. No, that’s a different show. I don’t know. Anyone who knows me well knows that my head’s always spinning, so it doesn’t have to be reset. It’s got to be calmed down a little bit, because I have no problem being creative, but I’m also the person that has to then figure out the logistics of a notion, and then make it an actuality. I don’t have any problem getting myself in the mood to sit and come up with a new idea. It’s implementing those ideas, and realizing which are the most viable.

12. Professionally, what do you want to be doing in 10 years?

Counting my money. No, you know, I would like to be at an exponentially more successful place than I am now, as compared to where I was 10 years back. As long as I’m continuing to climb the ladder, every year, then I consider myself successful. Specifically, I’d love to get involved in movies, and use my current success as a break into acting.

13. Do you have any icons or role models?

I have people that I respect. People like Robin Williams and Eddie Murphy and Jim Carrey and Will Ferrell; I respect people like David Letterman, and Leno, and Carson Daly. When you’re knee-deep in it like I am, and you realize how much work that goes into making it, and then sustaining it…you have a new respect for them. Other people can have a lot of harsh criticism, but for people to be criticizing Jay Leno, or even Jim Carrey, is comical to me. It’s a lot easier to sit back and make judgments of people if you’re not the one working your tail off and making sacrifices. Anybody who’s gone through what I’m going through, and survived, those are the icons of the industry.

No. I work. I don’t even have time for golf, I try to make time for exercise and going to the gym and stuff like that, but other than that, it’s time to work. I’m at an age right now where I have the energy to do this. If I have energy for anything right now I’m going to put it towards furthering my career.

15. Anything else you want to add?

The only other thing I want to mention is our tour. I’m doing seven dates in California, one in Reno. I’m also doing a private showing, for a very small number of people, in San Francisco. If I have 500 people at a venue, there isn’t much opportunity for me to meet the people I want to meet and just hang out. But for anyone who wants to hang out, they should come up to the New Year’s Eve party we’re having in San Francisco. It’s considerably smaller than most of the parties; it’s not the mad house we’ve had at some of our parties in New York. We’re trying to calm them down a little bit, so I’m not being passed around the room like a tray of hors d’oeuvres.

The “Drinking Made Easy” tour will be hitting California in December. For more information on Zane Lamprey’s tour, check out his official site. You can also follow him on Twitter.
3.8
Score
Popularity
Activity
Freshness
Jeremy Gutsche Keynote Speaker