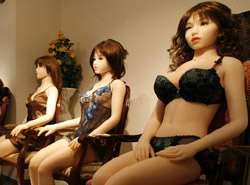 We may have featured the first story a few months ago, but the trend is picking up momentum in traditional media, with new articles being published each week to detail these controversial intimacies.

Here are a few other features that have received media attention:

On Tip/Tick, a Real Doll was created to look like Kelly Carlson.

Howard Stern revealed details on his own encounters with a Real Doll.

A UK documentary called Guys and Dolls followed four men with Love Dolls, detailing their individual reasons for having them.

"Mike, a Texan, risks a real-life relationship for his eight dolls. Another owner, Davecat, explains he prefers the security of his inanimate girlfriend over unpredictable, potentially cruel treatment he could be subject to from a real woman," Canoe explained.

"The documentary also takes a fascinating look inside the San Diego factory where the dolls are made. There, Abyss Creations has been manufacturing Real Dolls at a rate of six to eight each week for more than a decade. What Abyss makes are high-tech versions of 'love dolls' dating back to Second World War, where they were introduced by the Japanese and Germans to help their soldiers cope in an all-male environment."

We're not talking about cheap blow-up dolls here; these are very life-like and beautiful, some selling for over $6,000.

Check out our past features: