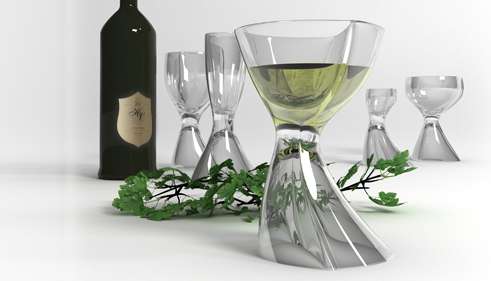 Amelia Roblin — September 14, 2012 — Art & Design
References: emrecaglar.net
When you've had a few drinks and the subjects of your photos are starting to look a little skewed, isn't it similar to the visual impression given by the Vortex Liqeur Glass Set? Based on the likely materiality of the chalices and the importance of their sturdy postures, their forms are difficult to wrap your head around.

Emre Caglar's concept is a spectacular one that draws formal influence from the intended contents of the warped wineglasses. The medium was treated with more fluidity than you'd expect from a solid, as if it was capable of changing shape under the impact of its environment.

The grace and asymmetry of the goblets was modeled as if a user was to whisk each piece of the Vortex Liqeur Glass Set towards him, causing it to misshape with the stand and the rim left behind.
2.1
Score
Popularity
Activity
Freshness