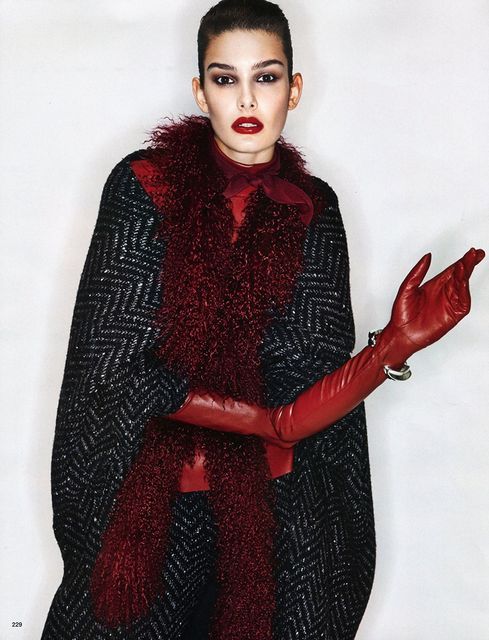 Jordy E — June 26, 2014 — Fashion
References: vogue.co.jp & fashioncopious.typepad
The Vogue Japan August 2014 editorial showcasing model Ophelie Guillermand displays the beauty's rebellious side. In many of the shots taken by photographer Sharif Hamza, Guillermand is found with her fingers clasped much like a smoker, though there is no cigarette in her hand.

Stylist Elin Svahn contributed to the offbeat rebel notes that characterize this Vogue Japan production. Red leather gloves were displayed next to tight pants, fuzzy scarves and feathered jackets, making for an eye-catching site to be seen.

Make up expert Maki Ryoke went along with the striking motifs at play in this photoshoot. Smoky eyes were chosen alongside dark red lips, purple gloss and highly defined cheek bones, drawing attention not only to Guillermand's apparel, but also to her cosmetics.
4.1
Score
Popularity
Activity
Freshness