Viral Marketing Not So Contagious 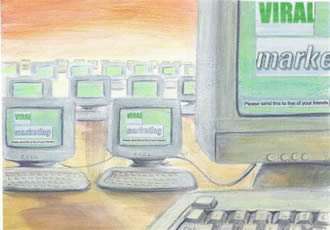 Bianca — September 4, 2007 — Marketing
References: jupiterresearch & informationweek
It turns out viral marketing isn't quite as contagious as businesses have been led to believe. Web 2.0 called for a rise in viral ads in order to best reach target consumers, yet a recent study by JupiterResearch shows that only 15% of these ads have been effective. The report titled "Viral Marketing: Bringing the Message to the Masses" was a reflection of the last year.

Viral marketing rests on the idea that an ad is so great, people will immediately want to forward the message on to a friend. The most common methods are by forwarding e-mails or newsletters, or by blogging.
"55% of marketers plan to decrease viral ad campaigns that target so-called 'influentials,' the trendsetters believed to lead the rest of the consumer sheep, so to speak," Information Week reported.

It turns out, 70% of advertisers think they're campaigns are dong pretty darn well, believing their brand awareness is increasing like wild fire; however, the study points out that their "confidence is completely unfounded because so few marketers succeeded with relatively more concrete indications of increased viral activity." Viral marketing is all about getting consumers to promote a brand, but it turns out that act "fared the worst of all success metrics."

Information Week recalls a Forrester Research report from last year mentioning that "consumer use of pop-up blockers and spam filters had doubled in the past two years."

So what's a business to do? Restrain a little.

"Regulating the spreading of viral messages is necessary to preserve reasonable response rates and ensure users do not abandon sites that have become too commercial," JupiterResearch wrote. "Fifteen percent of online users have stopped visiting sites because the sites have too many ads. Much of the responsibility for controlling ad clutter rests on the shoulders of the Web publishers themselves."
1.5
Score
Popularity
Activity
Freshness

21 Overhyped Products, People and News
From Anderson Silva to the iPhone