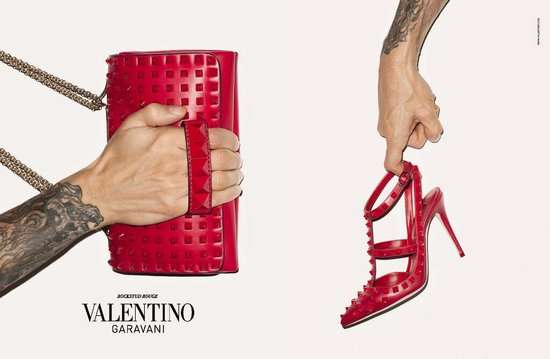 Meghan Young — May 14, 2013 — Fashion
References: valentino & fashionologie
Share on Facebook Share on Twitter Share on LinkedIn Share on Pinterest
The Valentino Fall 2013 Accessories ad campaign was not only shot by famed photographer Terry Richardson, it also stars him as well. Well, more specifically, it features his tattooed forearms and hands. Holding a studded purse and matching strappy heels in the signature Valentino red, he gives the accessories an edgy punch that they certainly benefit from. Especially since they have a punk element to them.

Debuting in fashion magazines around the world this week, the Valentino Fall 2013 Accessories ad campaign isn't the first time Richardson stepped in front of his own camera. Although it might be the first time he was used to evoke "the sensual yet elegant nature of our accessories, described as objects of desire," as stated by co-creative director Maria Grazia Chiuri.
4.6
Score
Popularity
Activity
Freshness
Jeremy Gutsche Keynote Speaker