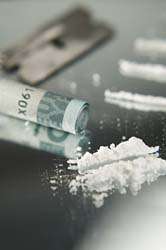 US Bills Have The Most Cocaine

"These findings should not be surprising, because cocaine and other drugs are traded using cash, which is handled by the same fingers that directly touch the drugs or wrappings," chemists Sergio Armenta and Miguel de la Guardia from the University of Valencia in Spain reveal. "Moreover, many cocaine users use a wrapped banknote to sniff this drug, so inducing direct cocaine contamination of the banknotes."

U.S. bills were found to contain an average of between 2.9 and 28.8 micrograms of cocaine depending on the year and city. Bills from 1996 take the cake with more than 1,300 micrograms found on some. Ah, the coke and heroin chic days:

So how did other countries around the world fare in this test? Spanish notes contained an average of 155 micrograms of cocaine. While levels of cocaine in German Euros were found to be five times lower than the Spanish ones.

The bottom line? Get your hands on some 1996 bills for a quick fix!
2.1
Score
Popularity
Activity
Freshness
Attend Future Festival