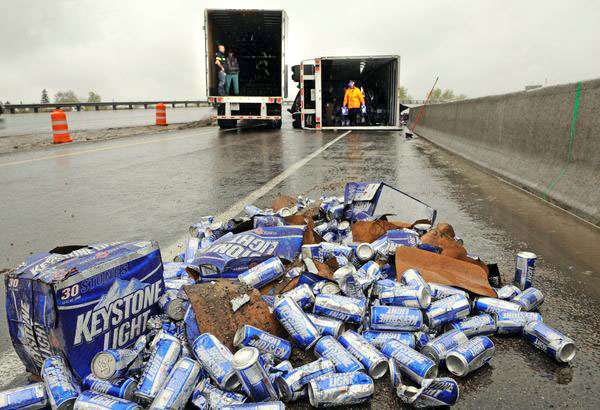 The photos submitted show an incredible variety of spilled goods - two beer spills and the attendant photos of freeloaders could be favourites. Or perhaps the 28,000 pounds of double stuffed cookies (video)?

There are numerous animal spillage ranging from alligators to pigs to chickens and one unbelievable dead whale whose stinking guts spilled all over the road.

Construction equipment falling off transport truck, car containers shedding their loads and even a crane tipped over its modular housing load all made it to the site. Even more amazing are the Tomahawk missile (shown here covered in a blue tarp), Russian rocket containers and a rocket booster!

Some more unusual losses include the Doritos which came off a shipping container on the beach which the site owner allowed since it nearly became a truck shipment! The Royal Canadian Mint also unbelievably lost a load of quarters!

Like the whale guts, the tar, the molasses, glue and red dye spills were particularly sticky messes to clean up.
2.4
Score
Popularity
Activity
Freshness
Get Trend Hunter Dashboard