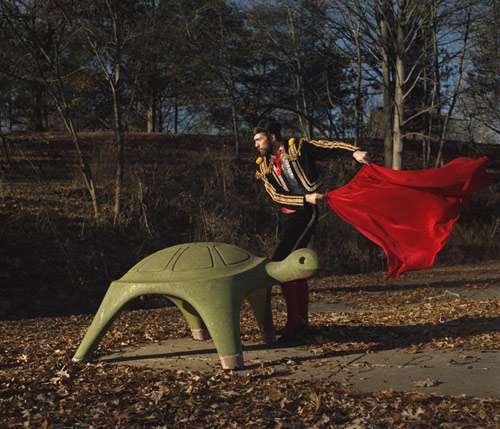 Troy Stains Photographs a Series Depicting a Bullfighter on his Downtime

Jason Soy — January 16, 2012 — Unique
References: troystains & booooooom
Share on Facebook Share on Twitter Share on LinkedIn Share on Pinterest
If you’ve ever wondered what matadors do when they weren’t busy impaling bulls, Troy Stains has your answer in his photo series entitled ‘En Temporada Baja.’ Starring a bullfighter with a hipster hairdo and beard, the serene collection of images depicts a matador practising his flag waving skills on a playground, sitting on a couch with his canine companion, trying on shoes, eating alone at a restaurant and other zany situations you wouldn’t expect professional cow killers to be in. It’s a simultaneously cerebral and comedic series.

Troy Stains explains that ‘En Temporada Baja’ is meant to explore, “the non-trancendent moments of typically transcendent figures.” He accomplishes what he sets out to do as the matador, an often revered figure in the arena, is relegated to an almost pathetic or ordinary figure in Stains’ work.
4
Score
Popularity
Activity
Freshness
Jeremy Gutsche Keynote Speaker