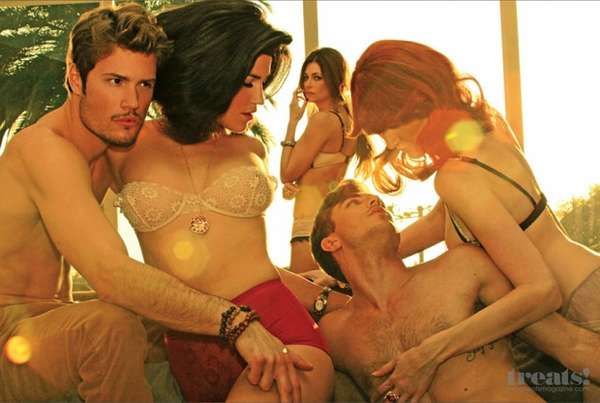 Meghan Young — June 22, 2012 — Naughty
References: treatsmagazine & fashionising
Share on Facebook Share on Twitter Share on LinkedIn Share on Pinterest
The Treats 'Diora's Key' editorial features a risque photoshoot revolving around the idea of a swingers key party. A decidedly '60s and '70s concept, the editorial has a retro vibe that helps to transport the reader back to those decades. Sensual and daring, it will have people squirming uncomfortably in their seats for a number of reasons.

Lensed by photographer Stephanie Vovas, the Treats Diora's Key editorial stars model Diora Baird, who is accompanied by Christy Nelson and Alisa Torres as well as a few male escorts. The subtitle reads, "They came, they played, they frolicked & a good time was had by all." Although, by the look in her eyes, it appears that Baird isn't as into it as everyone else is.
6.9
Score
Popularity
Activity
Freshness
Jeremy Gutsche Keynote Speaker

Multiple Personality Editorials
The Flare 'Who's That Girl?' Photoshoot is Vivacious and Fun