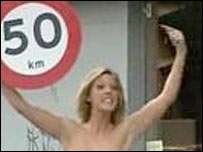 The TV ad is a spoof news report where topless blondes in hot pants strategically positioned at the side of the road carry traffic signs showing the Danish speed limit: 50km/h.

Danish road officials claim the novel but risquÃ© ads â€œare workingâ€ in warning motorists about the dangers of speeding.

The video â€“ see the link below â€“ targets and grabs the attention of the population most likely to speed: the young males. Though it also risks alienating and angering others; feminists have already given their opinion - they hate it.

The reaction to the Speedbandits video is being reported as mostly positive and a member of the road safety council highlights the thoughts behind the ad campaign.

"If you want to reach the young people, you have to communicate on their conditions... So, topless women are working."

What next for the Danish road safety council? Well, when asked if the council would consider using a man exposing his bottom to appeal to speeding women drivers, they said: "Maybe. We'll see."

If you want to see the Speedbandits video here's the link (Be warned: the video contains nude women and is likley to humor half the population and anger the rest!)