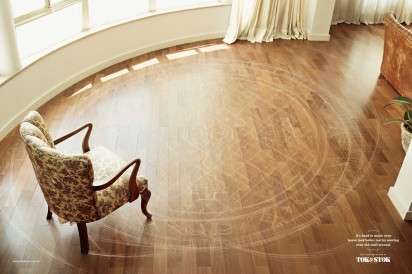 Meghan Young — June 8, 2012 — Art & Design
References: ddb & ibelieveinadv
Share on Facebook Share on Twitter Share on LinkedIn Share on Pinterest
The Tok & Stok campaign cleverly addresses the fact that many people end up rearranging their existing furniture when they are sick of what they are seeing. Oftentimes this results in a lot of sweat, back ache and, of course, scratched floors. The ad campaign focuses on the latter in a creative way. Instead of depicting normal scratched floors, it creates artistic murals, which does not make their existence any more comforting or desirable.