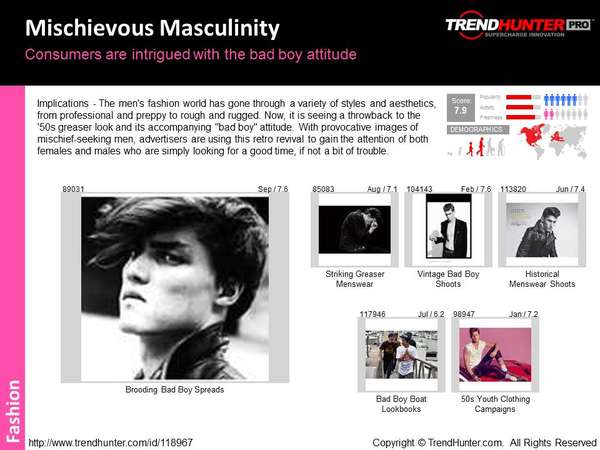 Grasp the Pieces Set to Match Suits, Tuxedos and Even Womenswear

Jordy E — March 29, 2012 — Fashion
References: trendreports
Share on Facebook Share on Twitter Share on LinkedIn Share on Pinterest
The menswear tie has been known to dress up even the simplest of outfits, adding classic old-school glamor to new-school looks. The tie is also a symbol of sophistication, commonly denoting business and professional-mindedness. Women have also adapted the look, opting for the same cravats and bow ties seen by menswear lines. The Tie Trend Report uncovers the styles leading this fashionable sensation, delivering a concise package of 128 PRO Trends and well over 1,000 terrific suit-oriented pieces.

The skinny tie is one of the more recent additions to the chic male canon. Dressed up or down, the design consistently showcases a sleek sense of refinement. The rise of viral men's blogs have further proliferated the skinny tie, making it a common buzz term. This, however, is only one of numerous necktie creations, all of which concern retailers, tailors and marketeers. Comprehend which ones are spearheading the milieu with the Tie Trend Report.