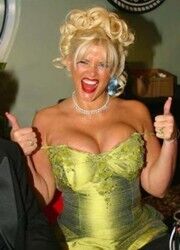 POPEYE — March 25, 2007 — Celebs
References: foxnews
Share on Facebook Share on Twitter Share on LinkedIn Share on Pinterest
TWO diaries written by Anna Nicole Smith have sold on online auction website eBay for more than $US500,000. Fox News reports " A 1992 diary, featuring 26 entries from June 3 to Aug. 16, sold for $282,500. And a 1994 diary, in which she writes, "My husband is very sick and very weak," went for $230,000. That brings the total to $512,500, not including the 20 percent buyer premium.
Thomas Riccio of Universal Rarities, the California memorabilia house that auctioned off the diaries, said the buyer was a German businessman. He is "a huge fan" of the former Playboy Playmate, Riccio told TMZ.com.

The 1992 diary has a blue cover with the words, "I follow my own star," on it. Inside, Smith says, "I hate for men to want sex all the time. I hate sex," reports the gossip Web site PerezHilton.com and other gossip sites.

She also reveals she cheated on her late octogenarian husband, Texas oil tycoon J. Howard Marshall II. Still, in the 1994 diary, she writes, "I wait each hour to comfort him with medicines and prayers."