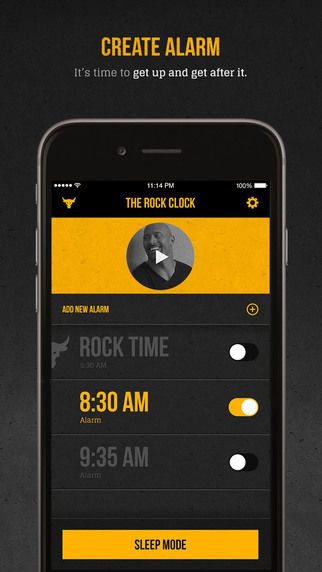 The Rock Creates His Own Alarm Clock App with Personal Ringtones

Riley von Niessen — May 3, 2016 — Tech
References: itunes.apple & theverge
Share on Facebook Share on Twitter Share on LinkedIn Share on Pinterest
Celebrity wrestler and actor Dwayne "The Rock" Johnson has created his own alarm clock app to get users positively motivated to start their day with no excuses, aptly named 'The Rock Clock.' Available for iPhone and Android users alike, the app is free to download and it is totally absent of in-app purchases. In order to discourage procrastinating, The Rock Clock has no snooze feature so users can't put off their goals for even five minutes.

The Rock Clock app asks users to set a personal goal, which can include a time or fitness goal with the option to add an end date for a specific alarm. As the setup screens progress, The Rock includes lines such as "It's on", "You can do this" and "You got this." Ringtones are created by Johnson as well and include some of his WWE catchphrases, lines from Fast and Furious or even just him repeating the word "beep."
5.2
Score
Popularity
Activity
Freshness
Attend Future Festival