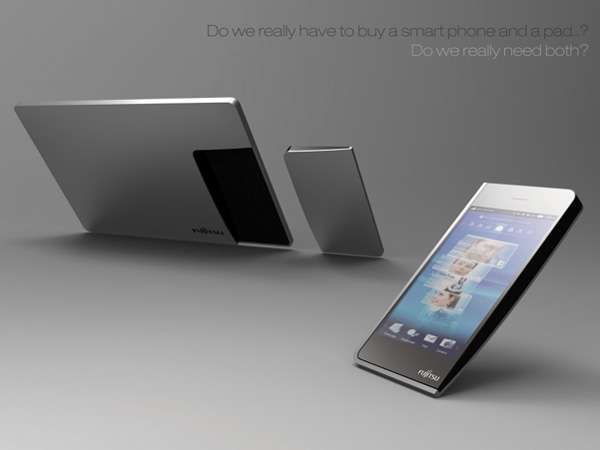 Michael Hines — October 4, 2011 — Tech
References: yankodesign
The day when the smartphone and tablet become one and the same may not be too far off if 'The Part' is any indication. 'The Part' is a conceptual smartphone/tablet designed by Eunha Seo, Junse Kim and Yonggu Do for Fujitsu.

The Part is a smartphone that slots into the side of a tablet. Details are scarce, but it is probably safe to assume that the tablet would be powered by the OS of the phone, turning the tablet essentially into a giant touchscreen dock for the smartphone. Turning a tablet into a giant smartphone dock may not be such a bad thing; it would make tablets cheaper and more accessible as people could buy them as accessories for their phones, not as standalone gadgets.

Fujitsu is known for its crazy tech concepts and occasionally a few of these concepts do become reality. Although it seems like a long shot, I wouldn't be shocked if The Part became one of those success stories. The world is currently obsessed with tablets, after all.
2.2
Score
Popularity
Activity
Freshness