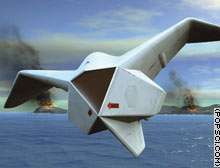 Greg Ponesse — February 26, 2006 — Unique
References: cnn
Share on Facebook Share on Twitter Share on LinkedIn Share on Pinterest
Lockheed Martin's Skunk Works, famed for the U-2 and Blackbird spy planes that flew higher than anything else in the world in their day, is trying for a different altitude record: an airplane that starts and ends its mission 150 feet underwater.

The Cormorant, a stealthy, jet-powered, autonomous aircraft that could be outfitted with either short-range weapons or surveillance equipment, is designed to launch out of the Trident missile tubes in some of the U.S. Navy's gigantic Cold War--era Ohio-class submarines.

These formerly nuke-toting subs have become less useful in a military climate evolved to favor surgical strikes over nuclear stalemates, but the Cormorant could use their now-vacant tubes to provide another unmanned option for spying on or destroying targets near the coast.
5.6
Score
Popularity
Activity
Freshness
Get Trend Hunter Dashboard