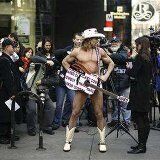 Rose A. Valenta — June 27, 2008 — Marketing
References: comcast.net
Share on Facebook Share on Twitter Share on LinkedIn Share on Pinterest
For 10 years, Robert Burck, has been entertaining tourists in Times Square as â€œThe Naked Cowboy.â€ His outfit consists of a white hat and cowboy boots and skimpy white underwear. He has trademarked his, well, "likeness" to companies for product endorsements and advertising. One of his commercials for Chevrolet appeared during a Super Bowl.

Along comes Mars candy company, maker of M&Ms, and they, well, put his â€œlikenessâ€ on a blue M&M billboard ad without permission. They also ripped off likenesses of the Statue of Liberty and King Kong. U.S. District Court Judge Denny Chin denied a motion by Mars attorneys to dismiss the $6 Million lawsuit; however, he also dismissed Burck's right to privacy, whatever is left of it, since he's been strutting his stuff for 10 years in public. (Does this sound like an episode of â€œBoston Legalâ€?).

(I can visualize Boston Legal's Denny Crane as The Naked Cowboy, can't you? ''Does this make me look fat?'' Denny Crane, Boston Legal: Spring Fever.)