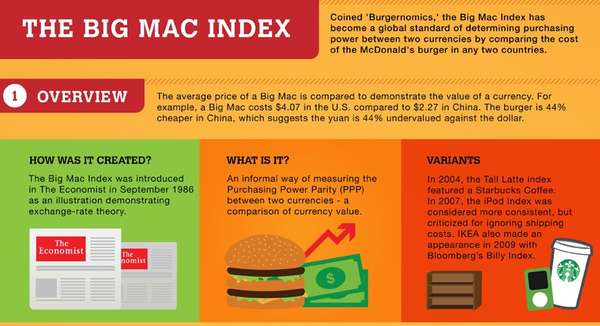 Rebecca Byers — January 22, 2012 — Art & Design
References: onlinemba & holykaw.alltop
Share on Facebook Share on Twitter Share on LinkedIn Share on Pinterest
The Big Mac Index is a system of determining the value of two currencies by comparing the price of a Big Mac from McDonald's in either country, and has been visualized in this infographic by OnlineMBA.com, a site dedicated to providing resources to students pursuing their MBA online. Also known as "burgernomics," the concept was introduced in 1986 by The Economist magazine and is a way of measuring purchasing power.

The most expensive place to purchase a Big Mac is in Norway, at $7.20, while the cheapest is in Ukraine, at $1.84. According to the Big Mac Index, "most emerging-market currencies are significantly undervalued," and the infographic also includes an alternative index that calculates the amount of time the average worker in a certain country would need to work in order to afford a Big Mac.
4.8
Score
Popularity
Activity
Freshness
Attend Future Festival