Women and the Economy
Next
Set of
Related
Ideas 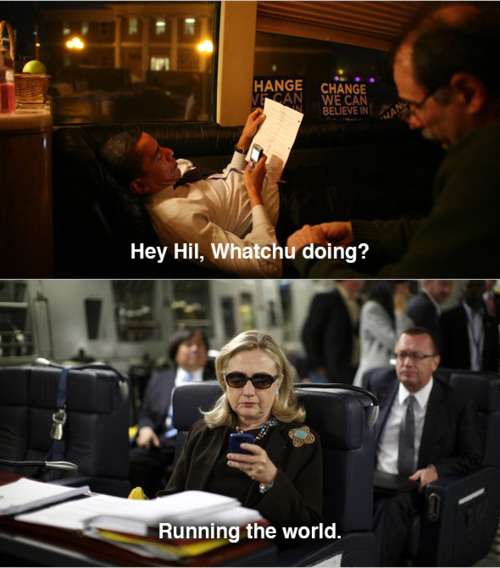 Jennifer Gosnell — April 12, 2012 — Pop Culture
References: huffingtonpost & textsfromhillaryclinton.tumblr
Share on Facebook Share on Twitter Share on LinkedIn Share on Pinterest
The new political blog 'Texts from Hillary,' featuring U.S Secretary of State Hillary Clinton, has been blowing up among news sources this week. Portraying Clinton texting responses to various political affiliates, chief among them being Barack Obama, Sarah Palin, and Mitt Romney, this blog and its imaginary snarky responses have been a hit.

Other famous figures have been edited in to portray her fictional relationships with the likes of Meryl Streep, Mark Zuckerberg, Anna Wintour and 'Hey Girl's' Ryan Gosling. The political satire of Ms. Clinton's texting endeavors has sparked the interest of Politico, the Washington Post and the Huffington Post, among many others.

Clinton herself has shown appreciation for the site and cited her Ryan Gosling 'Hey Girl' meme to be her personal favorite.

Predatory Political Documentaries
Is ‘Hillary: The Movie' a Campaign Ad or Legit Film?