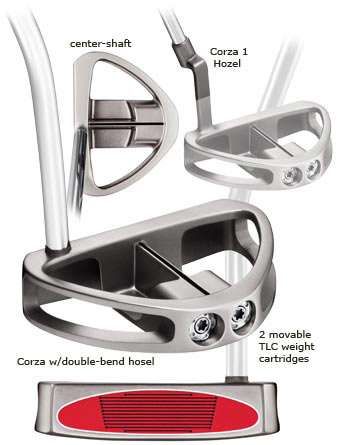 Kyla Gutsche — December 30, 2005 — Lifestyle
References: taylormadegolf
Share on Facebook Share on Twitter Share on LinkedIn Share on Pinterest
Taylor Made's new Monza Corza putter makes cheating on the green legal. The removable weighted cartridges allow you to customize the club to fit specific conditions. If there are fast greens ahead you can cut the weight to slow the ball, and if there are slow greens ahead you can add weight for a more solid stroke. If your putting dosn't improve with this club you seriously need to hire a coach or take up tennis!

FAQs
How did Rossa arrive at the name Corza for the new Monza model?
Corza was derived from the word "corsa," which is Italian for "race."

What purpose does Corza's Movable Weight Technology serve?
Corza's movable weight technology, which employs the same TLC cartridges use in TaylorMade products with Trajectory Launch Control, gives the player the ability to change the weight and feel of the Corza by installing differently weighted cartridges in the two ports located in the rear of the putterhead. The amount of weight that can be installed in the Corza ranges from four grams (two 2-gram TLC cartridges) to 28 grams (two 14-gram cartridges). Additional TLC cartridges can be purchased separately.

What is Rossa's Anti-skid Groove System Insert (AGSI) engineered to do?
With a typical putter, backspin is produced at impact, which makes the ball skid and bounce before forward roll begins. That skidding and bouncing can rock the ball off-line to the left or right, and can cause the putt to come up short of the intended target. Rossa's new Anti-skid Groove System Insert is engineered to reduce backspin and promote forwardspin earlier in the shot.

How do skid and bounce affect a putt?
The unpredictable nature of skid and bounce can easily throw your ball off of your intended line. Skid can rock the ball to the left or right. Bounce steals momentum, so the ball rolls shorter than intended. In a game where fractions of an inch can make the difference between missing a putt or making it, skid and bounce can and do affect the outcome of putts. Additionally, inconsistent degrees of backspin off the putter, when combined with the imperfect nature of most greens, further compound problems with distance control. Reducing skid and bounce, which Rossa's AGSI is designed to do, promotes better distance control.

What is the Anti-skid Groove System Insert made of?
Like all other Rossa face inserts, the AGSI is made of Titallium, a seven-metal alloy that's 40% lighter than steel, yet extremely durable. Rossa uses Titallium as an insert material because it allows Rossa engineers to save weight in the middle of the clubface and redistribute it to other areas of the clubhead, to improve the moment of inertia (MOI) for greater forgiveness on mis-hits and to move the center of gravity (CG) lower and deeper in the clubhead, to improve launch conditions to promote a better roll.

How many AGSI grooves are there, and how are they sized and positioned relative to standard grooves?
Rossa's Anti-skid Groove System Insert is scored with 12 CNC-milled grooves. Compared to standard iron or wedge grooves, AGSI grooves are 66% narrower and 50% closer together.

What are AGSI grooves filled with?
Unlike standard grooves, which are typically empty, AGSI grooves are filled with a soft polymer which dampens unwanted vibration at impact, contributing to better feel.

How do AGSI grooves affect the ball, given the relatively low rate of clubhead speed for even long putts?
The composition and construction of the Anti-skid Groove System Insert work together to bring the grooves into direct and active contact with the ball during impact, even on short putts. First, Titallium is a low modulus alloy, meaning that it's more flexible than steel. Second, the grooves in the face serve in part to strategically soften the insert's structure. Together, these factors allow the insert to deform at impact, which puts the AGSI grooves into direct contact with the cover of the ball.

How does the Anti-skid Groove System Insert reduce skid and bounce?
The grooves, because of their unique shape, "hold" the ball at impact, reducing backspin and promoting forwardspin. The result is less skid and bounce, equaling better distance control and better directional accuracy.

Which putter models are equipped with the Anti-skid Groove System Insert?
All new Rossa introductions in 2005, including the Monza Corza, Daytona 1 CGB, Sebring 3 CGB, Lambeau 7 CGB and Suzuka CGB.