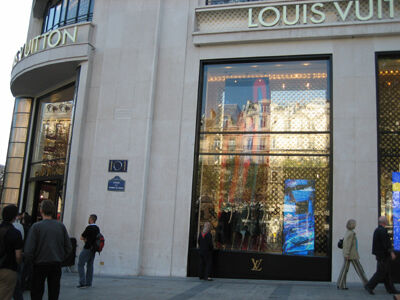 Louis Vuitton is known to make daring choices in collaborators â€“ from Takashi Murakami, who rendered the monogram in 33 colors; to the team-up of American photographer Richard Prince and Marc Jacobs for its S/S 2008 bag collection. So it's not much of a stretch to allow a bunch of students to fiddle with the brand. The competition, announced in May this year, challenged 80 graduates to come up with a design for the Christmas windows. The winning design is to be featured in all 380 stores around the world.

Winners Christopher Lawson, a 21 year-old from Ireland, and 26 year-old Marcos Villalba of Spain did their homework. They decided that the essence of the brand lies in travel, wood, and Asnieres, the historic workshop, and came up with Latitude 48.194/Longitude 02.286.

Wallpaper describes the winning concept as a successful synthesis of the brand's core principles: â€œa three-dimensional topographical map of the area surrounding Asnieres, made from poplar wood, used in frames of the Louis Vuitton trunks since 1854. Graphic, abstract, poetic and historic, it is proof that creativity is not something acquired through age of experience.â€

Carcelle was surprised to note that in the whole history of Louis Vuitton, â€œno worker has ever thought of travel in terms of latitude and longitude until now.â€ He was especially pleased at how simple the concept was to execute, making it possible to roll out quickly in any store window within two hours.