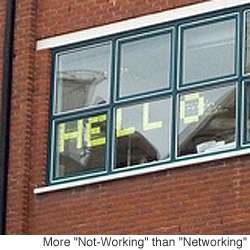 Rose Nazarali — July 19, 2009 — Pop Culture
References: holster & newslite
Two offices in London, UK have taken to sticky notes as their form of communication. The two offices, which are across the street from each other, leave giant messages on their windows for each other using brightly colored Post-Its.

“It looked like they were having the mother of all meetings which had spilled from the wall, all over the windows,” Richard Holt said on his blog. “Either that or they were trying to solve a murder. When we noticed this in our studio, we felt similarly inspired and thought we should say hello…”

Some of the messages include, ‘hello,’ ‘knock knock’ and ‘marry me.’
1.3
Score
Popularity
Activity
Freshness